Today’s song is “The Comforter Has Come” by SEU (Southeastern University) Worship. The first time I heard this song, I thought about Christmas, which was weird because obviously, the song is talking about the Holy Spirit, as Jesus described in John 14-16. However, when you look back at Scripture, Jesus was described as a Comforter, as well. In Lamentations 1:16, after the author describes the depraved and lowly state of Israel he states, “I weep for these things; my eyes overflow with tears, because a comforter, one who could restore my soul, is far away from me.” We know that the only one who can restore our soul is Jesus Christ, the Messiah. Actually, even God the Father is described as Comforter in Isaiah 51:12-13 and 2 Corinthians 1:3-4. This makes sense, since we serve One God–in three persons–who all share the same qualities and characteristics.

Anyways, I love this song right now, because He’s our Comforter in this season, and every season. Check out the lyrics below and let me know what ya’ll think.

Tonight I read John 4, which includes Jesus talking to the Samaritan woman at the well and noticed a couple new things as I read. We’ve covered this story quite a few times over the past few weeks in various Bible studies at church, so there’s much to be said about this encounter.

First, let’s point out that Jesus was a Jew and the woman was a Samaritan. Jews and Samaritans had nothing to do with each other; in fact, in the footnotes of my NIV Bible, it states that the Jews wouldn’t even eat out of the same dishes that the Samaritans used! So, immediately, this woman of intrigued by the fact that Jesus is even talking to her.

Second, Jesus offers her living water (which, of course she doesn’t understand). One of the young ladies in my young adult’s Bible study described the woman’s situation this way: “This is a woman who has been doing everything she can to make it on her own. In a land where women held no power, authority, or property, she’s married multiple times in order to be taken care of and have her needs met. And here, Jesus is offering to meet all those needs!” I love this, because that’s exactly what Jesus was doing when He offered her living water! He was offering to satisfy every need and longing of her heart, if she’d just turn to Him–the Messiah.

Third, when Jesus disciples return to Him, after buying food in another town, Jesus tells them to stop worrying about food for the moment and take a look at what’s going on around them. He says, “My food is to do the will of him who sent me and to finish his work. Do you not say, ‘Four months more and then the harvest’? I tell you, open your eyes and looks at the fields! They are ripe for harvest” (John 4:34-35).

Lastly, the woman went back to her town and testified on His behalf! The book of John says, “many of the Samaritans from that town believed in Him because of the woman’s testimony” (John 4:39).

What have I learned from this encounter? I’ve learned that God offers many opportunities for us to reach the lost. Most often, they’re right in front of us: the lonely student, the despised boss, the struggling single mom, the stripper, or drug addict. As His followers, we’ve already been offered and have accepted that living water; our duty is to pour it into the lives of others. But how often we get distracted by our daily tasks–or worry about what others will think of us because we’re associating ourselves with someone of “unsavory” or questionable character–that we miss out on what God is doing around us and what He wants from us! Jesus reached out to this woman, whom the disciples most likely would have overlooked, because 1) she was a woman and 2) because she was a despised Samaritan, but obviously, God had much more in store for her. And finally, we ought to be doing just what this woman did upon hearing about Christ’s goodness, sharing it with the world; so that others, in turn, will do the same. 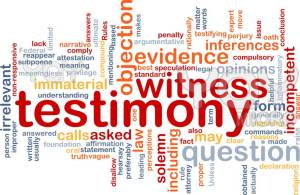 Was Jesus an actual person  or just a legendary character? Philosopher Bertrand Russell spoke for radical skeptics everywhere when he said, “Historically it is quite doubtful whether Christ ever existed all, and if he did we do not know anything about him” (Why I Am Not a Christian). Is Russell correct? Is it doubtful that Jesus lived?

In reality we have very good proof that Jesus existed. First, we have writings from early non-Christians. Flavius Josephus, the prolific Jewish historian of the first century, reported about major historical events of the era, including the destruction of Jerusalem in A.D. 70. Josephus was not a follower of Christ. Nevertheless, he said the following about Jesus.

“At this time there as a wise man who was called Jesus. And his conduct was good and he was known to be virtuous. Many people from among the Jews and other nations became his disciples. Pilate condemned him to be crucified and to die. And those who had become his disciples did not abandon his discipleship. They reported that he had appeared to them three days after his crucifixion and that he was alive; accordingly, he was perhaps the Messiah concerning whom the prophets have recounted wonders.” ~ Josephus quoted by Norman L. Geisler and Frank Turek in  I Don’t Have Enough Faith to Be an Atheist

In an essay about evidence for Jesus outside the New Testament, Dr. Edwin Yamauchi concludes that even if we did not have any Christian writings like those of the apostles, we would have the following facts from Roman sources such as Pliny the Younger, a philosopher, and Tacitus, a historian, as well as Jewish sources like Josephus and the Talmud:

Second, we have reliable evidence about Jesus’ life, death, and resurrection from eyewitnesses. Some of the New Testament authors followed Jesus personally. Others, like Luke, wrote within a generation of Jesus’ life and were familiar with eyewitness accounts (Luke 1:1-4). These authors were well aware of popular myths and false teachings about Jesus. They wanted to set the record straight in their own writings. The apostle Paul said over 500 people saw the resurrected Christ. (1 Corinthians 15:6). The apostle Peter said, “We did not follow cleverly contrived myths when we made known to you the power and coming of our Lord Jesus Christ; instead, we were eyewitnesses of His majesty” (2 Peter 1:16). In conclusion, we have excellent, reliable, and abundant accounts that help us know who the real Jesus is.

Sterrett, D. (2009).  How Do I Know Jesus Even Existed?. The Apologetics Study Bible for Students. Holman Bible Publishers: Nashville, TN.

Purpose on the Prairie
Doodles Invigorate